Following on from the Kusudama balls we made last week, Crafty Debbie and I decided to have a go at teabag folding this week. As it’s another paper-folding technique, it seemed a logical continuation to what we’d done the week before.

I have a couple of books on teabag folding, and a couple of sets of papers ready-cut that I was given on holiday last year, by a lady who gave me a quick tutorial and demonstrated some different folds. But, for those of you who don’t know about teabag folding, here’s a bit of information about it before I give a quick tutorial with pictures at the end. (Please excuse the creased paper in some pictures, we forgot to take some of them until later!!)

The History of Teabag Folding

Teabag folding is a papercrafting technique that traditionally involves the folding of squares of lightweight paper to create medallions or rosettes. It’s said to have originated in Holland by a woman named Tiny Van Der Plaas, who used the printed papers from teabag envelopes or sachets to create her designs. The art of teabag folding has evolved to use a variety of papers including lightweight scrapbook papers, gift wrap, Chiyogami and origami papers, as well as specific printed teabag folding papers. As experimenting continues with this technique, more designs are being created and used in a variety of applications. As well as the traditional medallions and rosettes, by making slightly different folds and assemblies butterflies,  umbrellas and even flowers are all possible to create with just a few folded shapes.

The basis of the teabag folds that Crafty Debbie and I did was the Basic Triangle Fold, one of the three most commonly used folds (the others being the Basic Square and Basic Circle Folds). These basic folds are then built upon for more intricate folds.

Here’s how to create a Basic Triangle Fold:

All of the medallions made are based on basic triangle folds. The first medallion made of the spiral-patterned paper was a simple basic-triangle fold medallion, made from the triangles slotted together.

The second medallion made of the spiral-patterned paper was made by folding down the front triangle’s corners to the centre. I then interlaced them by placing the flaps alternately (which are blue and pink) over each other.

All of the medallions made are based on basic triangle folds. The first medallion made of the Christmas-patterned paper was a simple basic-triangle fold medallion, made from the triangles slotted together.

The second medallion was made by folding the front triangle’s corners in half backwards, then slotting them together.

Finally, we made two mini medallions by taking the square of paper and folding into a single triangle. Place with the long folded edge along the bottom, before folding each bottom corner up to the middle. The first of the mini medallions is made simply by folding the two halves back down on themselves. The second variation is done the same way, but then we folded the pointed tip over too.

Anyway, we had fun with these tea-bag folding trials, and will definitely be doing it again! I hope you will be inspired to have a go too, and if you do I would love to see your pictures!

Hi! My name's Donna. I've been crafting since I suffered a Spinal Cord Injury (SCI) in 2007. Stuck in hospital all that year, I started making cards to write letters to relatives in and relieve the boredom. Since then, stuck at home all the time, I've carried on doing that, selling them for charity at Christmas. Now, I want to take my crafting to the next level, and spend 2012 learning a new craft each month. This blog will chart my progress along the way, and hopefully bring some inspiration to some of you too! View all posts by crippledcrafter 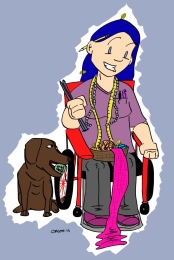